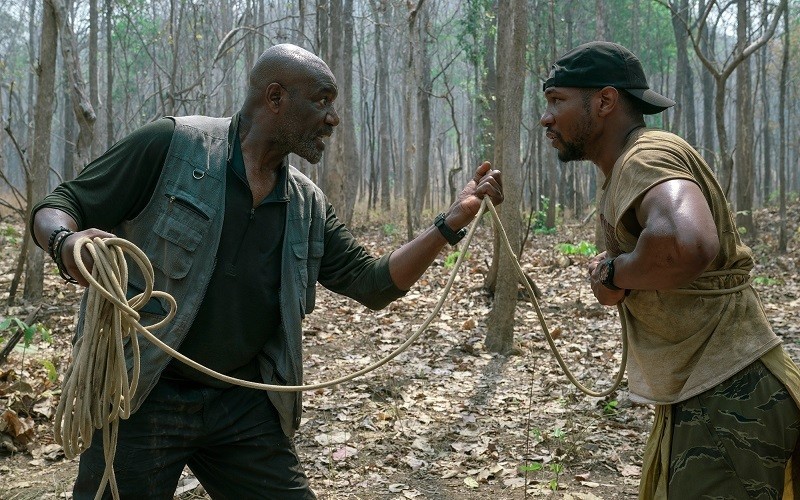 In its soul, Spike Lee’s “Da 5 Bloods” is about four Black American soldiers returning to Vietnam to reclaim the bones and wisdom of the man who guided them through war.

Stormin’ Norman, played with holy majesty in flashbacks by the late Chadwick Boseman, is the dominating voice of such wisdom in Lee’s gorgeously in-your-face history lesson about how America was never great. And it could never be great, if it treats people as it does and has. During his powerful monologues, Norman reminds his fellow Bloods about how America was built on the sacrifice of Black bodies, like that of Crispus Attucks, the first man killed in the American Revolutionary War. And when the five Bloods learn about Martin Luther King Jr.’s assassination, Norman is the one to steer them away from retaliation. “We control our rage,” he assures them. “They can’t use our rage against us.”

The past is present in the world of “Da 5 Bloods,” Lee’s Vietnam War movie that honors the PTSD the war has inflicted on the natives, and the soldiers who toured through. It’s a lively, multifaceted, and heavily emotional adventure, starting with four reunited veteran friends boogeying inside a club named “Apocalypse Now” (which even uses the logo from Francis Ford Coppola’s Vietnam War epic). Our complicated heroes (played by Delroy Lindo, Clarke Peters, Norm Lewis, and Isiah Whitlock, Jr.) experience the country through the pain of the Vietnamese people, and “Da 5 Bloods” distinctly removes jingoism from its dialogue on American history. Parallel to the movie’s compassion for how the American War never truly ended in Vietnam is also the context that America used Black lives for war while not supporting them at home; the Bloods were part of a generation sent to die for a country that then killed the leaders of their freedom. (The script was co-written by Lee and Kevin Wilmott, who rewrote a script by Paul DeMeo and Danny Bilson to focus on Black soldiers.)